The girls opening match saw Leminyor play Mgungani. Two goals were scored in quick succession putting Leminyor in the lead which eventually going onto win the first of the semifinals. Next up was Mveleni against Olmotonyi. After an intensive, quick paced match Mvuleni managed to win 1-0. 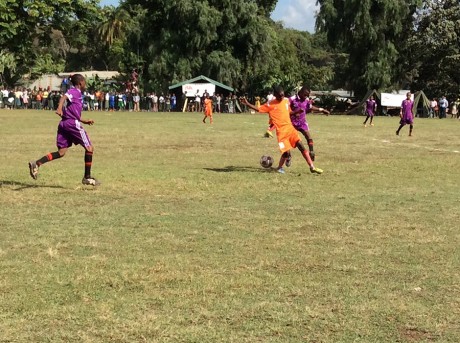 The first boys match, between Ngaramtoni and Mvuleni, was fast and furious right from the start. Penalties ended up deciding the outcome, where in the end Mvuleni scored four of the five penalties!

The girls’ final had a slow start, until Fatuma scored the first goal for Mvuleni just before the end of the first half. In the second half Leminyor found their form, but did not manage to score. For the last match of the day even Mount Meru came out from behind the clouds to watch. It was an even match, which could have gone either way. Fierce tackling and spectacular saves showed the determination in both teams. Late in the second half Asraf scored a beautifully worked goal for Katanini, which would secure them the title.

And so both trophies ended up in Moshi this year. Speeches at the awards ceremony recognised the hard work put in by all children, throughout the season, the dedication, commitment and sportsmanship displayed in the matches, and the fun everybody had, both on and off the pitch. As well as their trophy, the winners were given a wildcard into the East African Youth Tournament, to be held in Arusha in December 2017. The local TV station interviewed Ace Africa’s Gudila who explained the background to the football league, highlighting the positive outcomes of football in school: increased school attendance, happier children and improved academic achievements. 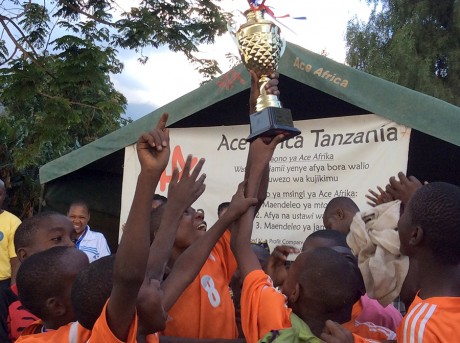 Special thanks must go to Olmotonyi school for hosting the event, Future Stars for their coaching of the children all season and refereeing their matches, and to Mrs Elinipa, representing the District Executive Director, for closing the season. She mentioned how sport brings children together, and how great it was to see the teams from Moshi and Arusha interact. The District Council supports Ace Africa and Future Stars in their work, because it is important that children play sport. She acknowledged that it makes them want to come to school, and increases their health and achievements. She hopes that teachers will continue to make time for sport in their timetables, and with a bit of luck the trophy will come back to Arusha next year!

Leminyor school, just outside Arusha, has joined the Future Stars Football League this year. They are doing well in the league so far,  with some mixed results for the boys and more wins for the girls.

Take Stefano Julius, he is 12 years old, and is currently in standard 6. He did not attend school regularly, doing jobs at home for his parents instead. His real passion is playing football, though, so when his school joined the football league, his parents had a hard time keeping him at home. When they realised what it meant to him, they changed their minds and now they are happy that he is in the team and proud of his achievements.

Stefano likes playing football. He likes scoring goals, but also recognises the other advantages playing a sport brings. It increases your fitness, and playing in a team is good because you learn to work together, as well as make friends. He is now very committed to his learning and is setting his academic ambitions high. He wants to finish school, and if he keeps working hard at his football, and keeps scoring lots of goals, he hopes to get a sponsorship. You can’t ignore the determination in this boy. He might not be the tallest in the team, but the moment he puts on a match shirt he grows a few centimetres. He is a striker and he scores goals. That is his job and he is proud of it.

There are many cases like Stefano, and all the schools involved in the league will have similar stories to tell. Parents are positive about their children playing football, teachers notice increased attendance and importantly, an increase in concentration, cooperation and friendships in the children. 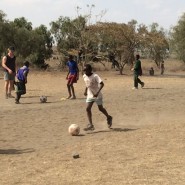 A note from the Dragon Schools Annemarie who is spending her sabbatical from the UK with Ace Africa Tanzania.

Football is a universal language. Anywhere around the world, you only need to bring out a football and any mix of children will play. Boys, girls, young, old, any colour, shape or size.
Such good fun.

In Tanzania, it has many more benefits than just that. Ace Africa have set up a football league for schools, in the Arusha and Moshi districts, and the effects this has had on school attendance have been stunning.

Originally an idea from Glenn Pierce, Head of PE at Eton College, the concept of getting school children to play football soon caught on. It not only improves their fitness, they also learn to play as a team, based on discipline and respect, and to develop leadership skills.

The pitches vary from sand to any amount of grass, and none of them are level, but they have goal posts, and the rest does not really seem to matter. 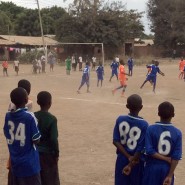 Harison Lyimo, who runs the Future Stars League for Ace Africa, also highlights the opportunities it gives those children who find academic subjects harder, to excel at something else. The moment they put their match shirts on you can see those children grow an inch with confidence. It teaches the children inclusion in the broadest sense of the word.

The natural progression was to set up a Future Stars Academy, where some of the players who show exceptional skills and promise receive additional training on Saturdays. Some go on to play at regional level. There are currently 12 girls and 18 boys who attend the sessions every week. There are six girls who are playing at regional level. 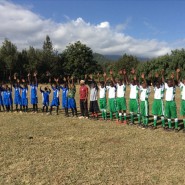 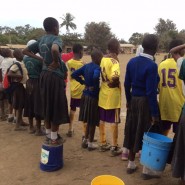 When you ask the children who play football at school, they will add that it brings people together, you make new friends, it is good for your fitness, and “it makes your brain work better” – not just when playing football, but in the classroom as well.

They like the training sessions and the whole team turns up, without fail. They recognise that while it is fun, they also practise useful skills and prepare for the upcoming matches. Their Future Stars coach will also assist the teachers who run the teams for the matches, with positions for the teams.

It is fun playing in a team as you learn from other people and you learn to work together. They would definitely tell the younger children to play football and to try to get into the team, because you also “get to travel and play against children from different schools”.

Coach Thomas from Future Stars agrees that playing football broadens their minds, as the children visit other schools and interact with different children.

It is a big commitment from the teachers involved from each participating school, but they can see the effects it has on the children, and not just the ones in the teams. It brings the whole school community together as they cheer on the boys and girls playing in the match. The children also want to come to school and consequently develop a school going routine, which will stand them in good stead for the rest of their lives.

At Olmontoni school near Arusha, football for girls is new in the school and really popular. Mwalimu Lucy says that the parents really appreciate this opportunity for the girls and they want their daughters to play. They come to watch the girls in the matches and they are there to support them. She points out Joyce who is now coming to school and is blossoming, both on the pitch and in the classroom. She will be an inspirational figure for many of the younger girls, who turn up to watch the training sessions after school – maybe one day this could be them. Future stars in the making! 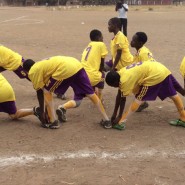 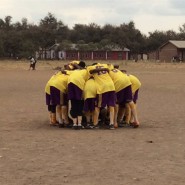