Ace Africa is an amazing organisation, working in tough and challenging conditions and changing real lives. 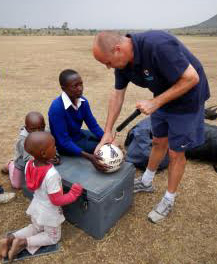 Ace Africa would like to thank The Peter Cundill Foundation who have funded both an Arusha and Moshi League this year. Without their generous support these leagues, helping 760 underprivileged children, would not be possible. The programme supports girls and boys from 24 schools get regular exercise not only improving their physical condition but also improving their concentration and output in the classroom.

In addition, we would also like to thank each UK School who have contributed to the continuation and success of an Arusha League. The schools have carried out a variety of creative fundraising activities such as, 5-a-side fundraising football matches, in-house competitions or sweater sales. Each of the schools have gone above and beyond enabling their peers in Africa to also experience the joy and power of sport.

The Ace Africa-Future Stars Football League would not have been possible without the invaluable support of Eton College’s Master of Sport, Glen Pierce. Since Glen spent his sabbatical back in 2014 to set up the Leagues pilot project in Arusha, Tanzania, he has been the driving force behind the involvement of other UK schools and the brains behind all sorts of fundraising initiatives in order to support the kick off of the Ace Africa-Future Stars Football League.