We are thrilled to have gained the support of a donor in an exciting new solar energy project in two Ace Child-to-Child schools in rural Siaya, Kenya. 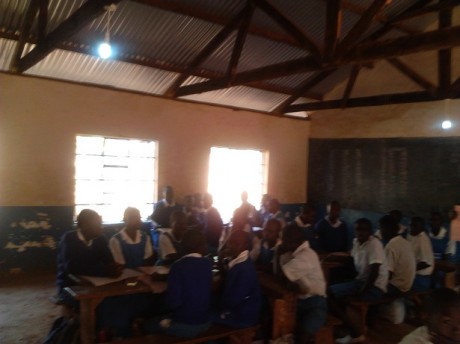 Although electrical power is the most used energy mode the world over, 90% of the people in the areas where Ace works cannot afford to tap electricity due to the huge cost of installation and maintenance. Households and schools in these rural areas frequently rely on paraffin lamps which can be dangerous and in some cases have caused schools and houses to burn down. Lives and homes have been lost due to these lamps.

Solar energy can be harnessed easily in the areas, and is cheaper, renewable, safer and user friendly as well as versatile. Using solar energy units will help achieve access to a lighting system which is effective, healthier, environmentally friendly and safer for those schools and households supported.  It will help reduce sight problems among the rural poor and cases of houses burning down will be reduced in households provided with the solar electricity.

The off grid power project was piloted in 2 Child-to-Child (CtC) schools; Liganwa (685 pupils) and Nyadhi Primary school (540 pupils) where 3 class rooms and one administration block in each school were electrified with the solar system.

In Liganwa primary, the solar system has been installed in 3 classrooms; class 7 with 2 streams, class 8 and administration block. This lighting system will serve 68(35m, 33f) children in class 7 and another 53(28m, 25f) in class 8.

This pilot project will therefore directly benefit a total of 233(115m, 118f) children from the 2 schools. With this project, the children have already started their remedial classes with improved performance.

The off-grid project has shown a lot of promise in improving the performance of children in schools. We are immensely happy with this pilot project in schools and would wish to extend the support to more CtC schools and to households as well.