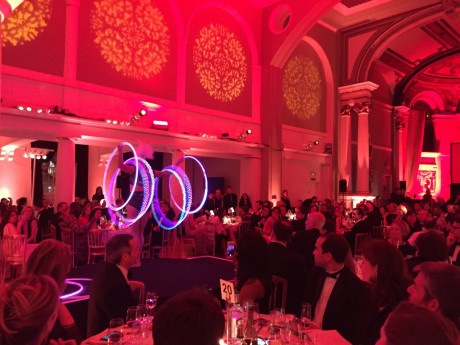 On March 26th 2015, Ace Africa hosted its biannual gala dinner at One Marylebone (London) to showcase some of our recent achievements as well as raise funds for upcoming projects. A champagne reception with entertainment from Q Strings was followed by a three-course meal crafted by Ace patron and 2-Michelin starred chef, Phil Howard. Other Ace patrons Liz Earle and Andre Villas-Boas and co-hosts also contributed to ensure that the night was a huge success!

A silent auction kept guests bidding during the entire evening and Ace Trustee Mark Chamberlen provided the opening remarks, introducing Hula Hooper, Lisa who showcased her signature act – Differente. This was followed by Patrick Drummond’s keynote speech and a screening of his film about Ace beneficiary Christine, shot on location with Ace in Kenya.

Violinist and lot donor Dmitri van Zwanenberg gave a spectacular performance to kick off the live auction after the main course had been served. A particular highlight of the evening was the incredible auctioneer Charlie Ross, whose efforts in the live auction and pledge helped raise an astounding figure.

Altogether the evening raised a staggering £150,000 net, which will go a long way towards developing communities and supporting vulnerable children and women in rural Kenya and Tanzania. We would like to take this opportunity to once again thank everyone who attended and contributed to such a delightful evening and thank you all for your continued loyalty and support.

Additionally we would like to personally thank our Gala Committee, sponsors, lot donors and team of volunteers for all of their hard work and generosity in putting this event together.