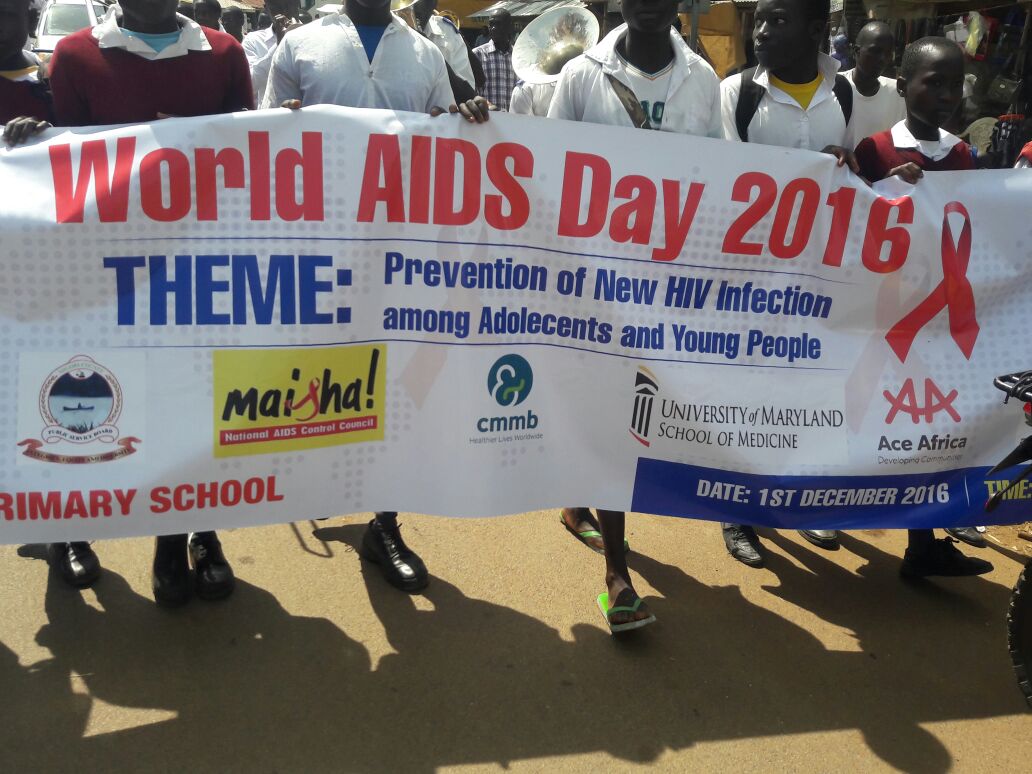 On 1st December all around the world, communities commemorated World AIDS Day. Particularly in the regions where Ace Africa works in Western Kenya and Northern Tanzania there was a hive of activity. World AIDS Day provides an important opportunity for people to unite in the fight against HIV, show their support for people living with HIV and to commemorate people who have died. Globally there are an estimated 34 million people who have the virus. Despite the virus only being identified in 1984, more than 35 million people have died of HIV or AIDS, making it one of the most destructive pandemics in history. The pandemic is most severe in Sub-Saharan Africa where, over 60% of all people living with HIV reside.

Despite this, Ace Africa and the communities it works with have a lot to celebrate. Since the beginning of Ace Africa programming in Bungoma in 2003, HIV prevalence has decreased from around 30% to just over 3.2% today. That said there is still much work to be done in making AIDS a thing of the past. In Homa Bay, Siaya, Migori and Kisumu, four other counties in which Ace Africa works, HIV prevalence continues to remain high with 1 in 4 members of the community living with HIV in many areas.

World AIDS Day communities of Bungoma, Migori, Kisumu, Western Kenya and Moshi and Arusha, Northern Tanzania, held banners and wore red ribbons in a march of solidarity. As well as this communities came together and carried out HIV awareness drama in the community market, Arumeru district of the Arusha Region of Tanzania. Ace Africa utilises drama and theatre methodologies within the communities in which it works, to create knowledge and awareness of HIV, including surrounding, protection, treatment and care. Participatory drama facilitates discussion and creates greater impact in changing communities’ negative perceptions and attitudes towards HIV. It is an extremely effective tool for de-stigmatising the disease, creating open discussion and in turn increasing people’s ability to seek treatment, get tested and protect themselves from contracting the virus.

Community drama focused on the theme of HIV in Arusha, Tanzania

In addition, DREAM girls of Homa Bay, Kenya, sang within the market place to raise awareness of HIV, sexual and reproductive health rights of girls. In Kenya and Tanzania young women account for around 70%, per cent of new HIV infections. This is due to a combination of factors including the deep-seated gender inequality, prevalence of intimate partner violence and lack of access to prevention, testing and other HIV care programmes.

In partnership and supported by PEPFAR And Gates Foundation this year Ace Africa has begun to implement the DREAMS (Determined, Resilient, Empowered, AIDS-free, Mentored, and Safe women) programme with adolescent girls which aims to address the structural drivers that directly and indirectly increase girls’ HIV risk, including poverty, gender inequality, sexual violence, and a lack of education. 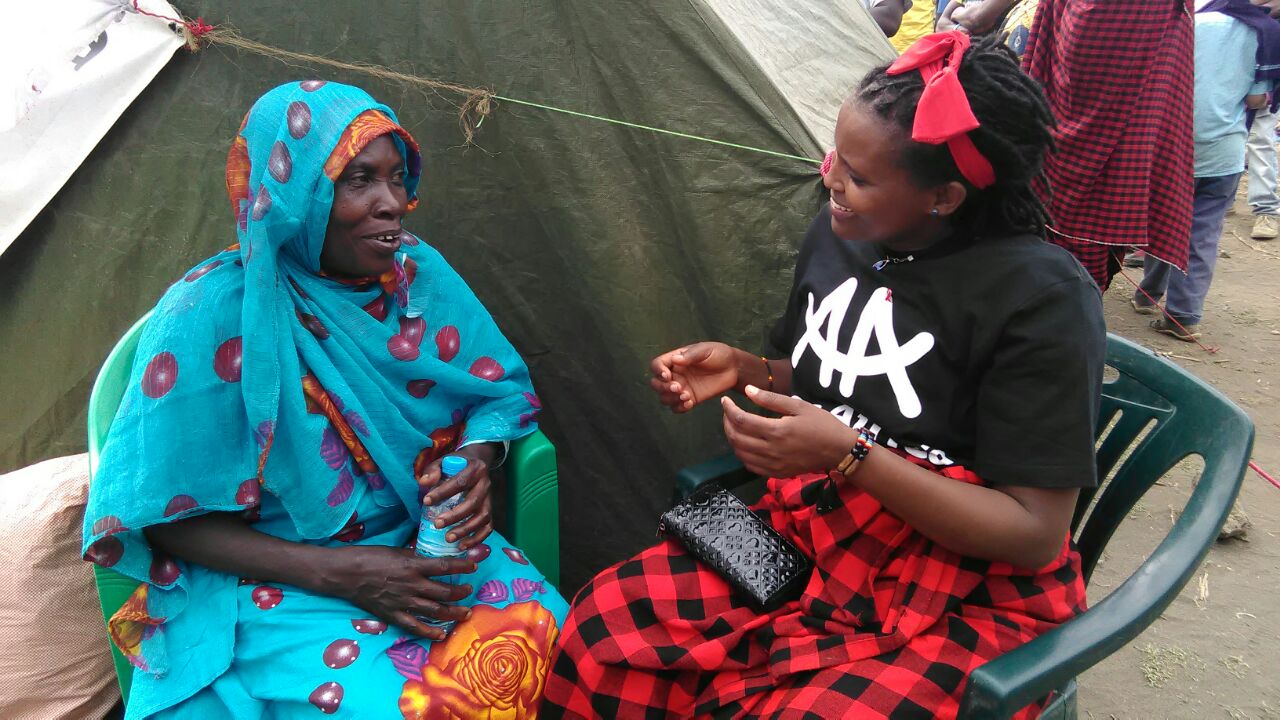 Eveline, talks to Ace Africa counsellor about the problem of HIV stigma on World AIDS Day

In addition, this year Ace Africa was awarded it’s forth multi-year grant from Comic Relief focused on HIV care. The programme in Arusha, Tanzania, utilises a number of activities and methods to increase access and improve quality of HIV services. The programme also involves training Community Health Workers on HV prevention, care, support, counselling and importantly in digital data collection to improve the monitoring of people living with HIV, their adherence to medication; information which will in turn help health centers HIV health care response. 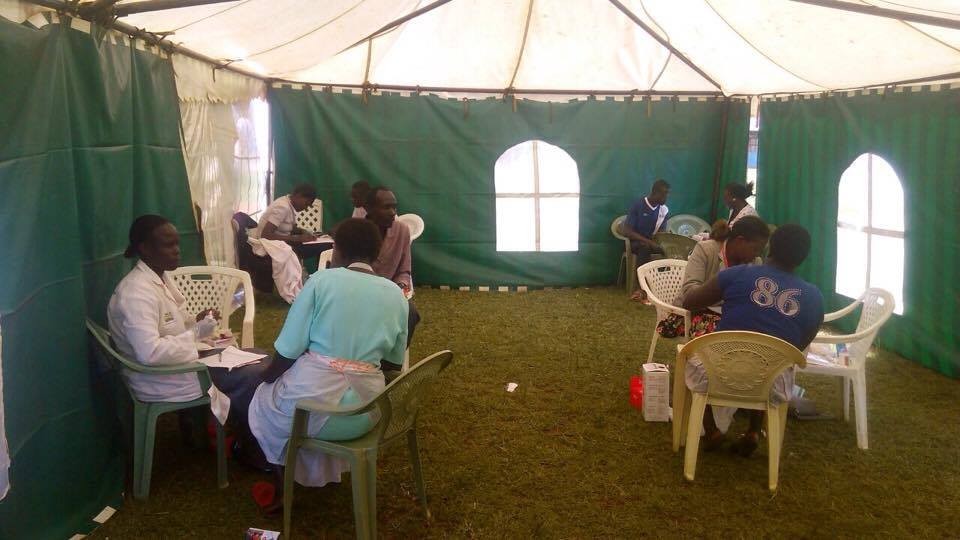 Ace Africa has, in the last few months also started to implement a programme directly targeting key populations, such as sex workers (SW) and men having sex with men (MSM) in a project funded by Fhi360. These groups are particularly at risk from HIV. The project aims to strengthen HIV services and also create links between the services and between key stakeholders, whilst also promoting the rights, knowledge and meaningful participation of key populations so that they may be part of the solution to communities HIV and AIDS response.

As well as these projects which specifically focus of HIV related community development, Ace Africa’s also implements other holistic programmes which include supporting communities to become self-sufficient in food, income and health security. This holistic approach is critical for reducing the impact and prevalence of HIV. 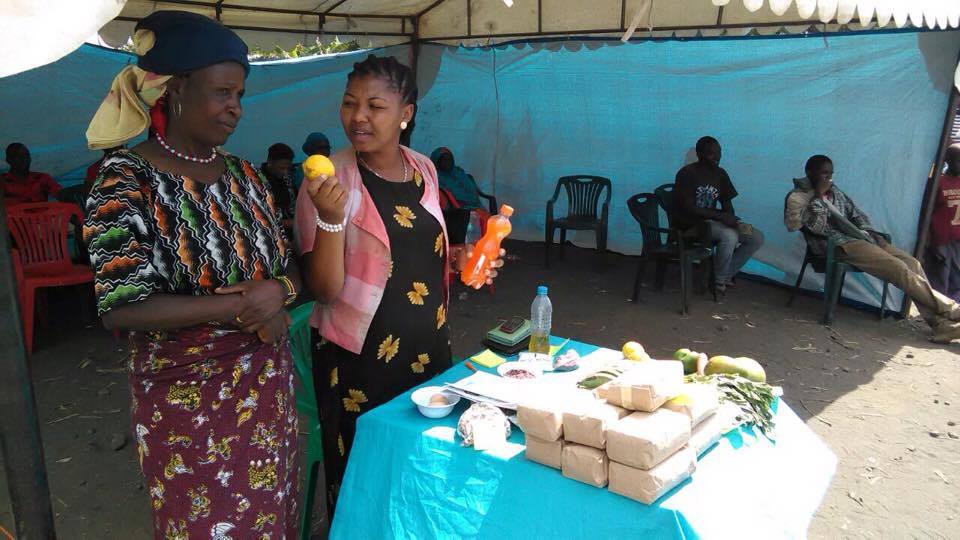 Nutrition training and how this can help those living with HIV provided was Arusha, Tanzania on World AIDS Day

This year The United Nations announced that the “World can end the AIDS epidemic by 2030”. Ace Africa is determined to support the realization of this goal.

Quotes from the day

“People living with HIV have rights and you should not stigmatise them. They deserve to be treated equally and even if you are healthy you need to test and know your status”. Eveline, an Ace Africa beneficiary living with HIV, made this statement to a group of 200 + community members at Ace’s World AIDS Day event. She is a true hero who is showing incredible strength and courage to be open about her status in her community, in Oltrumet Ward, Rural Arusha District of Arush Region of Tanzania.