In rural Moshi, Kilimanjaro Region, Tanzania, child rights abuses are a cause of serious concern. Studies suggest that 29% of children (aged 6-17) are involved in manual or casual labour (Ace Africa Baseline Research, 2012) and 27% of girls experience sexual violence before the age of 18 (UNICEF, 2012). Cases of child rights abuse are inherently connected to poverty in Moshi. A 2012 UNDP report suggested that poverty levels in the Kilimanjaro Region were as high as 33%. Some would argue that a lack of socio-economic opportunity in the region for adults engenders a negative environment for children to grow up in and results in cases of child rights abuse.

Ace Africa has been supporting communities in Moshi, Tanzania since 2012 in a number of different ways. Working with the local government and other partners, Ace aims to increase community skills and knowledge in Child Protection, Health and Livelihoods and at the same time strengthen structures that support welfare services.

With the support of the Egmont Trust, Ace Arica has recently been working on a programme which focuses particularly on advancing the rights of children in Moshi. Part of this programme includes developing child protection systems, which have been implemented in Moshi since 2012. Since then, Ace and its team of community volunteers have established four Child Rights Committees composed of community leaders, retired paralegal community members, teachers, and other community members who have been trained on the CRC (Convention of the Rights of the Child) and the legal steps to refer and resolve cases of child abuse. They have become the ears and eyes of the community and are committed to protecting the rights of their children. Ace has also established 15 Child-to-Child clubs in primary schools in Moshi which provide 1,273 students with life skills, health, hygiene, nutritional education and psychosocial wellbeing. 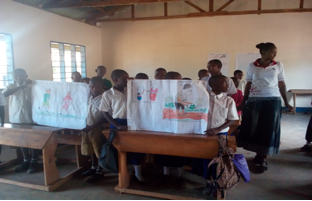 In addition, Ace Africa has introduced participatory drama in the community and schools to address the issues of child abuse. These drama performances are tailored towards the specific cultural and contextual reality of the community and through them, start to address and break down the barriers that condone the precursory foundations of abuse, for example, FGM, early marriage, sexual violence and rape, abuse and child labour. Children and the community are presented with the predominant traditions and behaviors which negatively impact on their lives, in dramatic format, in a comical and culturally sensitive way. This provokes discussions both amongst children and the community, ultimately creating a break down in these negative traditions. Children are becoming empowered with knowledge and confidence to stand up for their rights and to become active agents of change in the community.

Since the new grant supported by the Egmont Trust commenced in November 2015, 10 teachers and 10 local actors in Moshi have been trained in the Child-to-Child methodology and together with the students produce community plays. Over 1,500 children have attended these drama performances.

With the support of the Egmont Trust, Ace Africa is also working to address inherent stigma around HIV and AIDS. Between November and April 2015, six outreach Voluntary Counselling and Testing Clinics (VCTs) took place. All of the sessions utilised community drama as a way of educating and encouraging people to get tested, whilst also providing the VCT services. In addition, during this time, over 1,200 condoms have been provided to people living with HIV and AIDS at health facilities, during VCT outreach and during counseling sessions in homes.

Ace Africa understands that in order to make a real difference it has to tackle the many different yet mutually reinforcing problems in the communities in which it works. These include addressing poverty, food insecurity, lack of access to education and health services and the protection of children’s rights. The long-standing support of the Egmont Trust in our many project sites has enabled Ace Africa to deliver our holistic programmes. This newly Egmont supported project in Moshi, is enabling Ace Africa to roll out its work and to address poverty and deprivation through innovative and inclusive methodologies and in a sustainable and holistic way. Working in partnership with the government and key members of the community, including leaders and teachers is fundamental to Ace Africa’s work. Thank you Egmont for your longstanding and continued support.